Facebook
Twitter
LinkedIn
Email
PrevPreviousMechanical Advantage: 2:1 or 3:1? – RLA Partner Richard Delaney of RopeLab
NextAnchors: The Underpinning of Everything That Has a System Attached to ItNext The term ‘redundant’ is used with roping systems however I often wonder how much thought is truly put into this concept.  By definition, a redundant component of a system is one that is not needed.  A system with complete redundancy is one that will not fail as a consequence of the failure of any single component.

Generally my aim is to have rope systems with no single point or person of failure.

My position is a step away from the often-mentioned “whistle stop test”.  The theory is that such systems should be able to tolerate all hands letting go on a whistle blast.  I prefer to work with the assumption that the action (or inaction) of any single person will not be catastrophic.

I also think it is reasonable to have exceptions to “no single point or person of failure” so long as there has been a thorough assessment of the system and potential modes of failure.

There are really only three options for our systems:

The following video is an example of a minimalist counter-balance rescue with absolutely no redundancy.  I used this method in an assessment as a rock-climbing instructor a long time ago.
The assessor queried me with: “But you’re still up there?”. Well, the task was to get the suspended climber down an overhanging pitch in the fastest time.

There are many single things that could fail and likely result in catastrophic system failure:

In other words, pretty much everything in that demonstration was a single point, or person, of failure.  There are no backups.  Everything has to be done correctly.  Just like when rock-climbers belay and lower each other all over the world, every day of the year.

Sometimes it’s good to remind ourselves that many people still use rope systems perfectly well with absolutely no redundancy.

If asked, many rope access and rescue technicians will claim their systems have complete redundancy.

On clarification they will, of course, acknowledge that this generally only applies to the components between the anchor and the harness.  A ‘bombproof’ anchor is unquestionably sound and no-one wears two harnesses.

The most commonly overlooked single point of failure is the human operator.  Although there are now many devices that attempt to minimise the likelihood of human misuse or interference, there are always those who manage to override these extra ‘safety’ features.

It is only when we start to look a little deeper that we can find inconsistencies with this assumed position of complete redundancy. If using these in our systems we would avoid having the whole system reliant on a single Maillon Rapide.  Not because we question its strength – but because of the potential for inadvertent misuse.  So why then, on many harnesses, are we happy to rely on a single Maillon Rapide to connect the chest harness to the sit harness when suspending an operator solely from their sternal (chest) attachment point?

And what about rigging plates? Rigging plates used in configurations such as the one shown here have often been the subject of debate.

I know that there are many positions on this however I’m going to give mine.

Given our general acceptance of bombproof anchors, the desire to wear a single harness, and that training can provide competent technicians, perhaps we can move forward from the desire for complete redundancy.  Our approach to redundancy should actually be risk driven and consider the likelihood and consequence of particular hazards.

We don’t need to be too academic in this analysis of risk.  It may even be based on a consideration of what events might be reasonably foreseeable:

I deliberately left out the most often asked question around the justification for redundancy:

“What would happen if that carabiner/rope suddenly broke?”

Well I am yet to hear of a situation in a normal roping environment where this has occurred.  If we assume that we are using components from reputable manufacturers and sourced through a reliable supply chain then the only reason such components of our system may fail is poor practice.  This poor practice includes:

Unfortunately the common factor here is the technician, not the equipment.

So, we should make every reasonable effort to ensure that any single human error does not result in catastrophic failure.  This means attempting to provide ‘redundant’ components for any aspect of the system that may be misused by a human.

We should also be aware that introducing extra equipment may complicate the system and make system checks more difficult.  The following image is just an example. Assuming the structure is sound (and smooth), the orange rope/knot setup is less prone to human error and far easier to understand and inspect than the blue rope/knot/carabiner/ring/bolt.

This image is an example of an effort to introduce redundancy. However, we must be certain that stacking rigging plates has not introduced unintended consequences. The strength of carabiners is discussed in detail here: Carabiner Specifications.  Importantly, the strength of a carabiner is determined in tests when pulled between 12mm round pins.  In this image, the two stacked rigging plates resemble some thing more like an 18mm square pin.  If the carabiner was an offset D shape, rather than the oval shown, then it is conceivable that the load point could actually be 18mm away from the inside of the carabiner spine. So here, adding redundancy to the rigging plate has actually reduced the strength of the system.

There are certainly rigging plates that are designed to be bolted together however it may be more productive to revisit the motivation introducing redundancy before launching out and buying more.

This next image demonstrates the use of a backup belayer to remove the single person of failure operating the non-locking (or locking) belay device. A system like this is commonly used by climbing instructors and in climbing gyms.  It will not pass the “whistle stop test” however the extra person (the backup belayer) provides a simple and very effective way to cover poor belaying.  Top-rope rock-climbs in a natural cliff environment provide another excellent discussion point for appropriate redundancy.  It is common to place two locking carabiners at the top of the climb. This is appropriate because it is reasonably foreseeable that there could be movement of these carabiners, miss-orientation, or even contact with a rocky protrusion.  So, even though there is a chance that the double carabiners may actually be weaker than a single, it is more important to guard against inadvertent opening and release of the single climbing rope.

Appropriate redundancy should be risk based and protect from reasonably foreseeable modes of failure.  This is primarily to cover for human error and misuse of equipment.  Sometimes there may be particular techniques or components that need no added redundancy.  This consideration must be made on a case-by-case basis and consider the complete context.  What was OK on site A may be completely different on site B.  Rain or dropping the temperature may change everything.

Introducing redundancy should be seen as just one of many possible options for managing risk but it is not THE solution and it will not reduce the risk to zero.

For More Richard Delaney See or Click Here .  Want to see where Richard’s courses and workshop will be held? 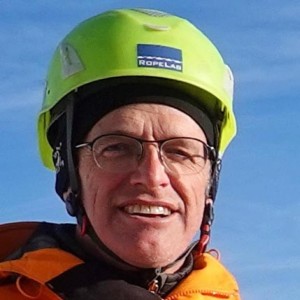 Richard, the founder of RopeLab, aims to promote a better understanding of the fundamental principles underpinning the craft of the rope technician. He originally created RopeLab to build a greater understanding of the physics of roped systems. Seeing value in ideas being shared across industries, Richard looks at the physics of roped systems and equipment that may be used in a range of situations and industries. Climbers, rope technicians, riggers, slackliners, arborists and rescue operators all will find useful information here. Through the countless tests that he conducts to generate data that he can then apply to real working situations, his reports detail the methodology and results of each test conducted and he encourages critical assessment. Richard also delivers regular workshops which aim to facilitate learning in a social and practical environment. These workshops encourage critical thinking based in an understanding of fundamental principles rather than rote learning. Experience across a range of industries gives Richard the capacity to tailor workshops to specific environments.

40 thoughts on “Redundancy in Rope Systems”