How To Use The Petzl Reeve Carriage Pulley: Reeving Highlines Let’s take a look at the Petzl REEVE carriage pulley and some of its common uses. The REEVE is made from two high-efficiency pulleys mounted onto a rigging plate. This design simplifies setting up rescue systems on a highline by reducing the amount of equipment needed as well as reducing the overall height of the system. The pulleys open on the same mechanism as the Petzl SPIN pulleys which means they can be operated with one hand or while wearing gloves.

There are five lower attachment holes which allow for multiple rigging options. In a highline application, the control lines are typically connected to the outer holes, and the inner holes are used to connect the pulleys for the REEVE system. The central attachment hole can be used to connect backup systems or for connecting a positioning lanyard such as the GRILLON. These holes all have smooth edges, which allows for metallic or textile connections. Because of this, you can tie ropes or slings directly into the REEVE, which will reduce on equipment needs and the overall weight of the system.

These holes are 19 millimeters in diameter, which allows most carabiners to rotate through them. The upper attachment hole can be used to connect a second track line or for connecting secondary control lines. The large diameter of this hole still allows the pulleys to be opened, even with the carabiner connected. The back of the REEVE is flat, which allows two of them to be used back to back in a parallel system. All right, so in this setup, we have two tensioned track lines to create a redundant system. Now the REEVE will travel back and forth on the lower track line, but is also connected to the upper track line with a separate pulley connected to the upper attachment point on the REEVE. We have also installed control lines on the lower outermost connection hole of the REEVE. This will allow the team to move the REEVE back and forth horizontally. On the inner attachment holes, we’ve connected SPIN pulleys to create our reeving system. This will allow the team to lower the rescuer and raise them back up with a patient attached. Now for clarity, I have not installed a backup to the reeving system here. But I could do so by attaching ASAP LOCKs to the rope on each side of the pulley, or by connecting an independent vertical line to the center attachment hole on the REEVE.

On a sloped highline, a redundant system is still required to help prevent the REEVE from traveling down the highline. To do this, we have attached a second control line to the upper attachment hole on the REEVE, using a carabiner that is large enough to fit over the uphill pulley sheave. This can be done using a carabiner such as the AMD or the WILLIAM. 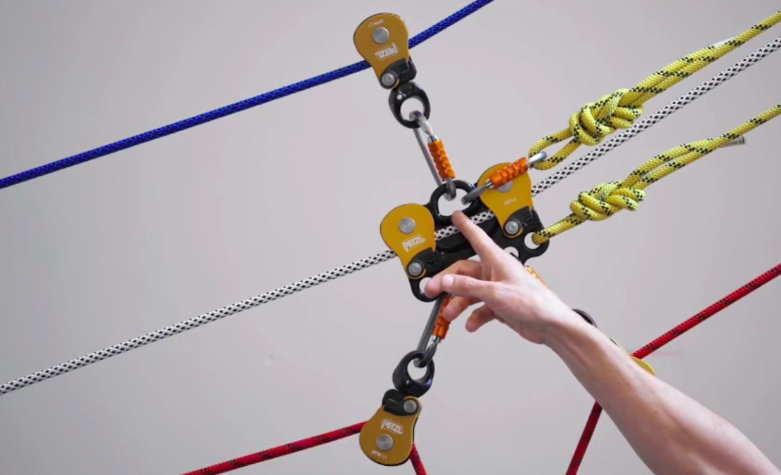 All right, so for this final configuration, we have two track lines that are rigged at the same height with a horizontal offset. And I’m using two REEVEs back to back. We need to make sure that the control line and the reeving line are connected to both REEVE pulleys, and I can make this connection a couple of different ways. Option one is to use separate carabiners independently connected to each REEVE. Option number two is to use a single carabiner passed through the attachment holes on both REEVEs. Option number three uses this exact same configuration, except for we notice that the pulleys may not sit parallel and can tilt slightly outward. To fix this, we can use a carabiner clipped to the central attachment point of one of the REEVEs. This will help create a block between the two REEVEs. These are just a few tips on how to use the Petzl REEVE. For additional information, please visit Petzl.com.

Peace on your Days!! 152 thoughts on “How To Use The Petzl Reeve Carriage Pulley: Reeving Highlines”