Effect of pulley friction. Most rescue pulleys have an efficiency rating of .75 to .90 (only 75% to 90% of tension is transferred from one side of the pulley to another due to friction). A carabiner used as a pulley has an efficiency of only about 50% or less (more for a steel carabiner, less for aluminum).

Effect of rope on rope friction.

Rope rubbing on rope will significantly reduce the efficiency of the system. Avoid crossing strands of rope within your MA system.

Effect of other sources of friction.

Techniques to reduce this friction:

Maximizing Throw of the System

• With simple systems move the mainline anchor farther from the edge in order to increase the throw.

• In compound systems, the second system (that which is farthest from the load) will collapse before the first if co-located on the same anchor.

• Staggering anchors in a compound system will reduce re-sets. To maximize potential the first system should chock-o-block simultaneously with the second or earlier.

Use the following formula to determine anchor separation: 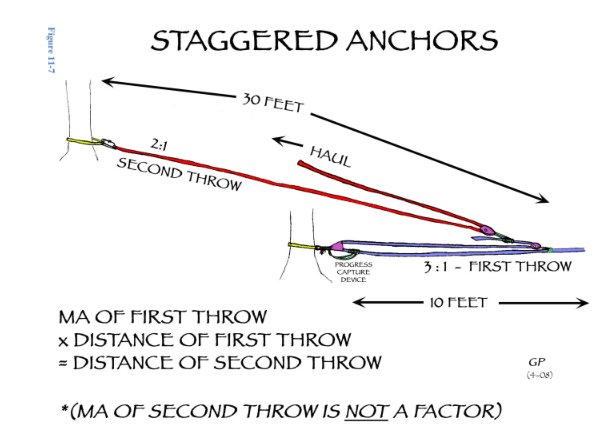 If higher levels of mechanical advantage are needed during a hauling operation, it is significantly more efficient to build upon the existing system than to disassemble it and build a new, more advanced one.

The 2:1 and 3:1 are haul systems upon which progressions of higher degree systems can be easily built without tearing down the original and starting anew. 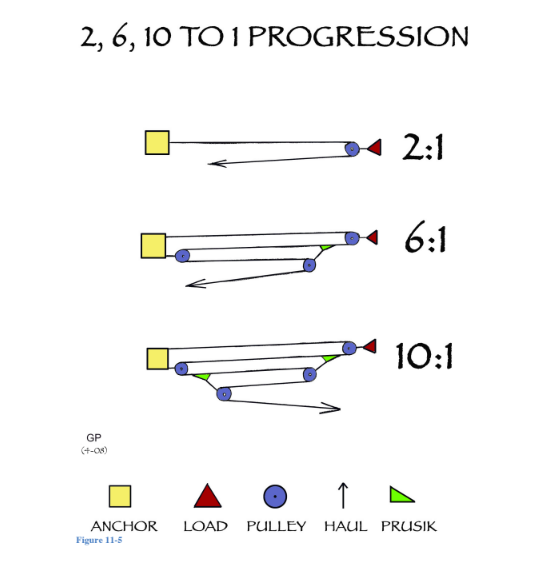 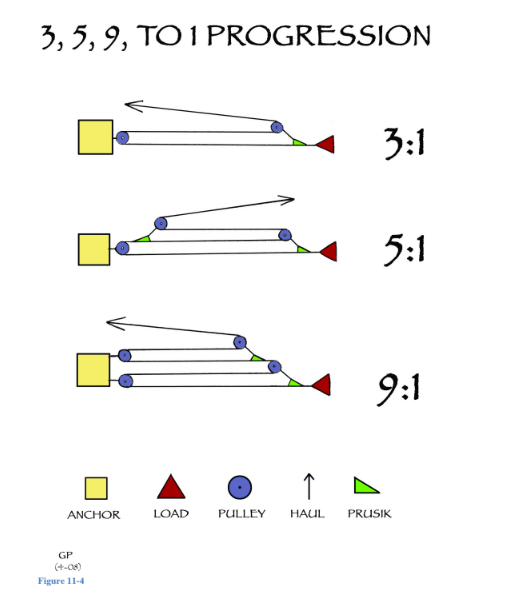 Manual haul systems are high-load/high-risk techniques and the possibility of catastrophic failure is greater than in lowering systems. Never apply more mechanical advantage than is needed to raise the load. The ability to raise the load will be significantly enhanced by utilizing techniques that increase system efficiency. The rescuer should know how to minimize the effects of friction from various sources, how to maximize system throw, and how to increase mechanical advantage if needed. The rescuer should also know how to calculate the mechanical advantage of a system in order to evaluate forces applied to the anchor and to the system as a whole.