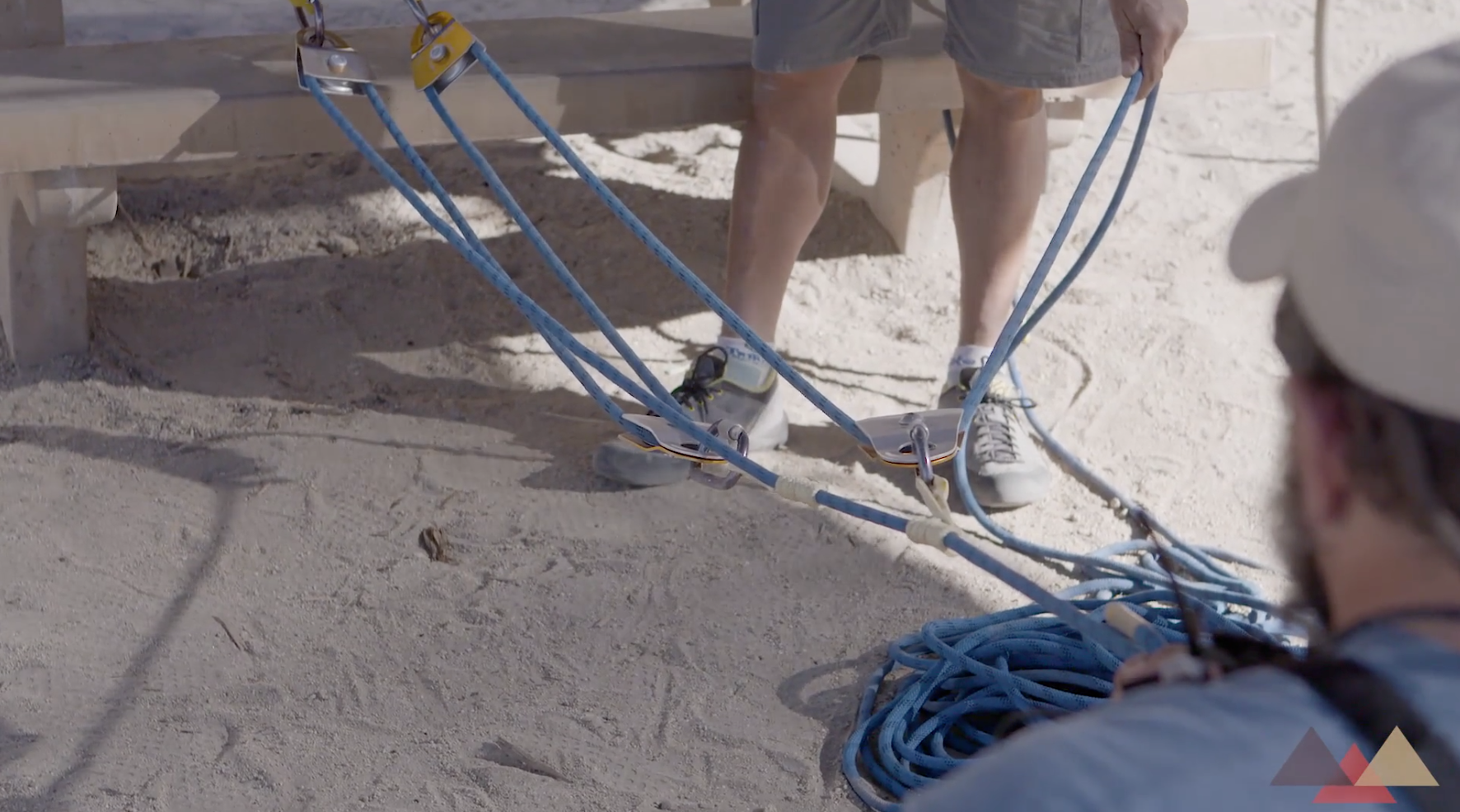 At this point in the discussion, I’m going to go ahead and omit the one from our T just in the interest of saving space. You can just assume that T is the same as one T. So again, I’m going to start at the haul strand where the haul team’s actually going to input the tension into the system. We’re going to assign T to that, and follow T down to our first pulley. The T enters on one side T exits on the other side, and we have two T.Basically transmitted through the first prusik to the load strand of the rope.

We continue to the second change of direction pulley, T goes in; T comes out. This T’s transmitted down the line and it bumps into the first two T, and we move on to the second two T. So we have T, plus two T, plus two T , equals five T. We have a five to one mechanical advantage system.

And let’s go back and balance our equation. We have 1, 2, 3, 4, 5 Ts up at the anchor. And in this case, our anchor is carrying four fifths of the load. The other fifth of the load is being supported by the haul team. So we have five T on the anchor as well, and we balance. 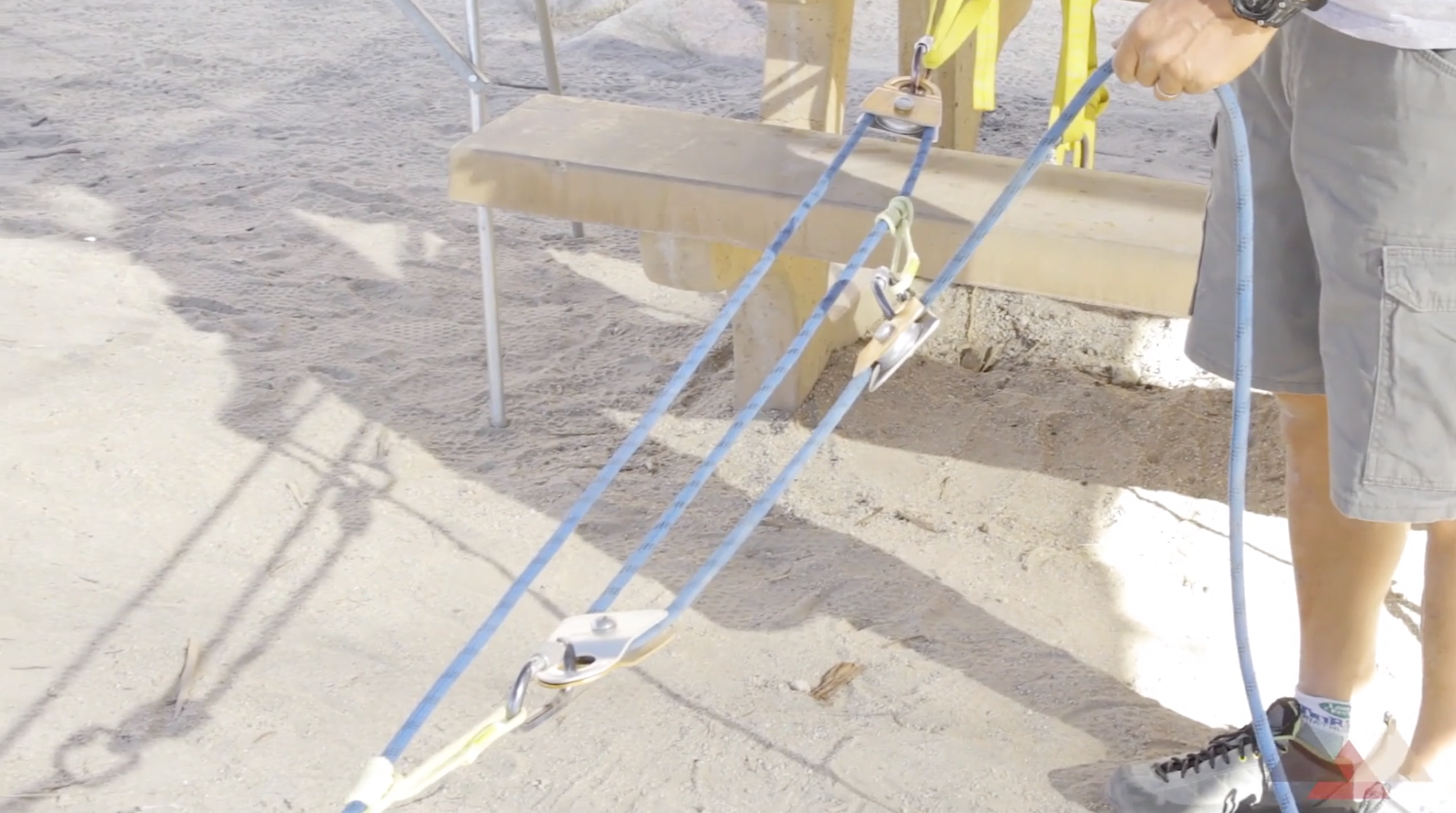 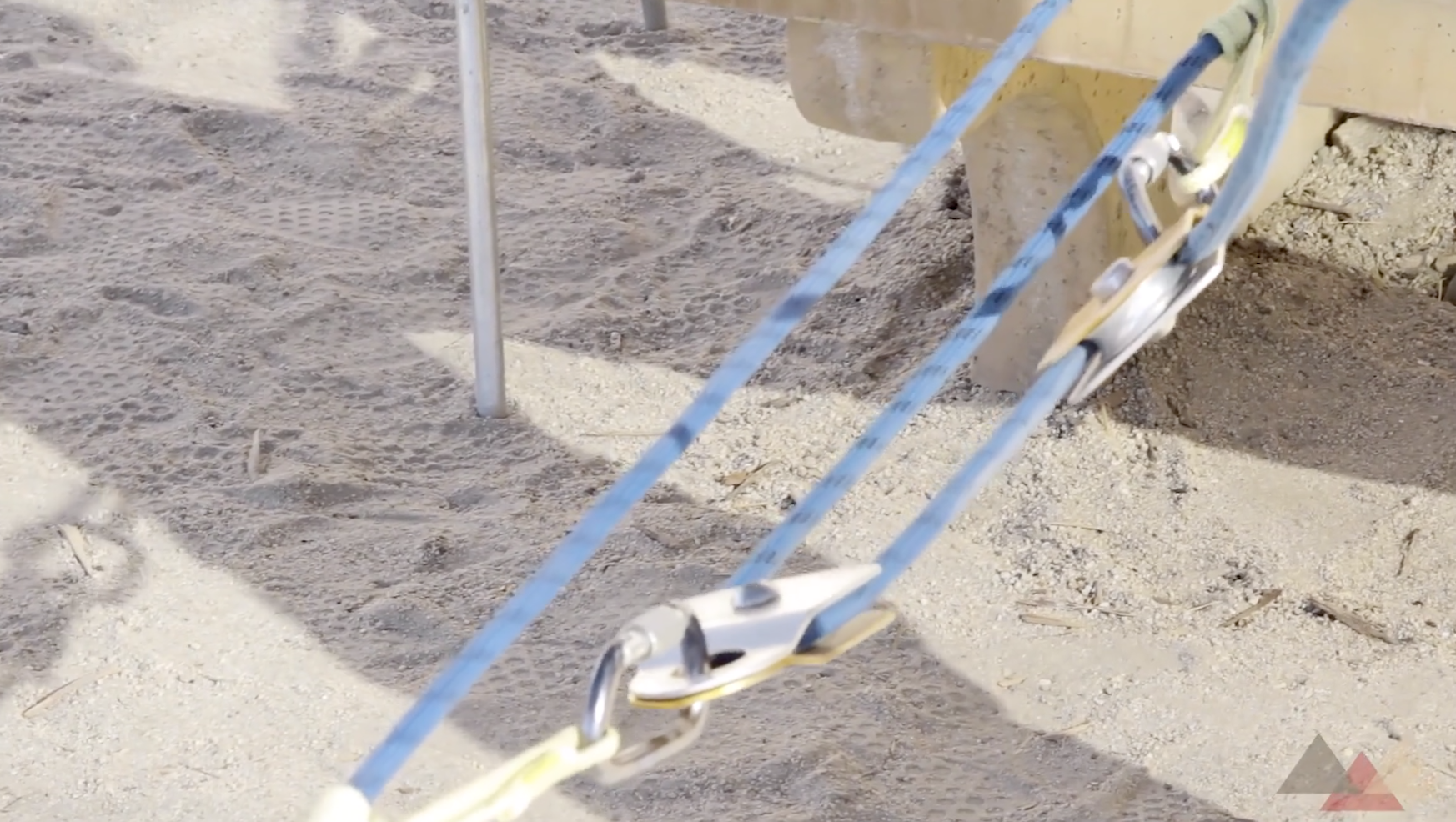 Probably the most accurate way to define a complex system is it’s neither simple nor compound. Some defining characteristics are you have moving pulleys, pulleys that are actually performing work and moving a load that are moving in opposite directions of each other. And as you see this system function, you’ll see, I have two haul pulleys that are actually moving in opposite directions.

Another advantage is that you’ll notice we’re pulling away from the anchor. So if we want to pull downhill, for instance, I might build this complex five to one, so I can actually walk downhill and use gravity to assist our haul.

Disadvantage is that it needs to be reset a lot more often. You’ll see the pulleys come together and they come together basically twice as quickly as the pulleys collapse in the simple five to one. So at some point I’ll have to stop and reset the system, which brings us to another point. 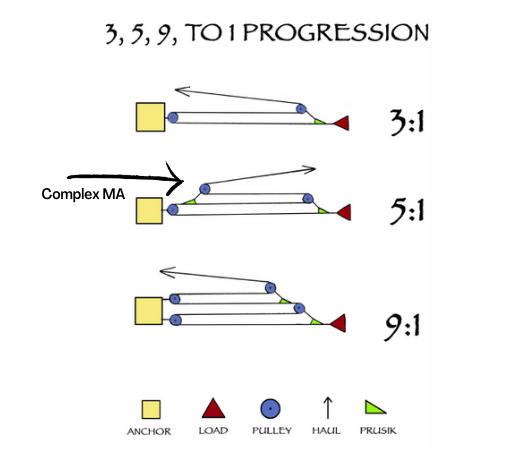 Ordinarily. We would affix a prusik probably here below the first change of direction pulley so that any uphill progress that we make would be actually captured on that press. But we’ve omitted that for this discussion.

All right, moving on to analyzing our, our final mechanical advantage system, our complex five to one. As always, we start with our one T where the haul team is hauling. Then in this case, the whole team is hauling to in the direction of the load. One T goes in; one T comes out, and we have two T transmitted through this prusik. This T continues, T goes in, T comes out and another two T on our second prusik. T continues up and it runs into this two T, and we actually have three T and again, whatever goes into a pulley has to come out of a pulley. 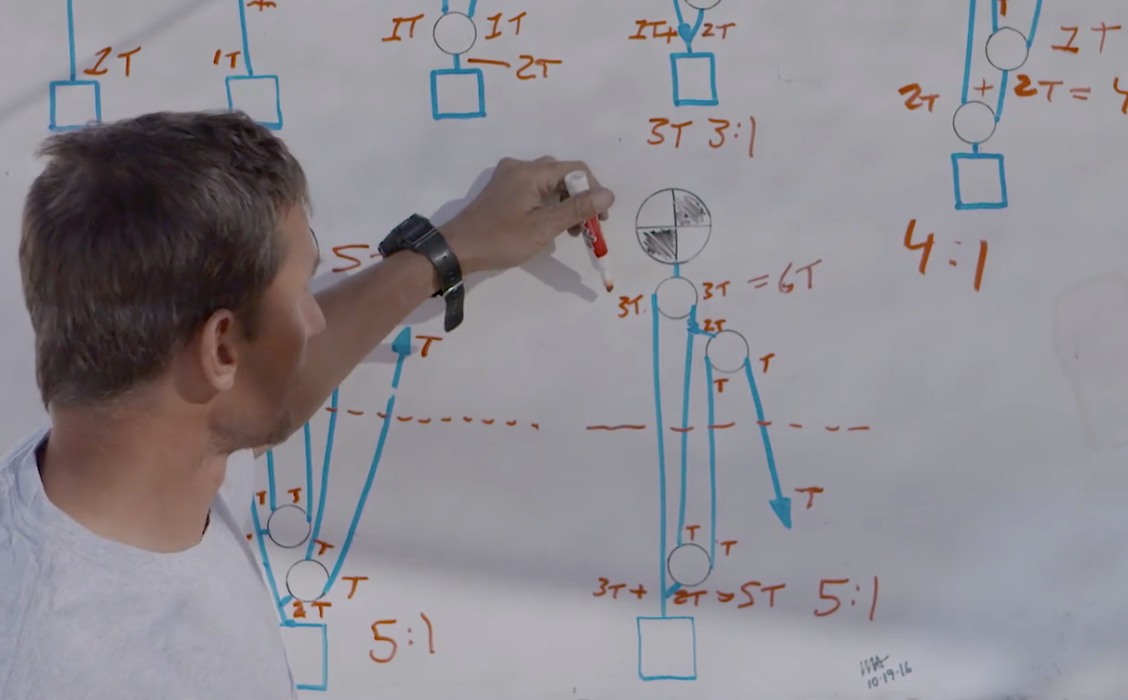 The pulley, the pulley has to balance the tension. So now for the first time, we actually have more than one T going into a pulley and we have three T, three T comes out, three T transmits down the line to where our two T is waiting on the second prusik. We can add those together for a five to one haul system.

Balancing our equation, we have three T plus three T equals six T on our anchor. This is similar to our hauling a one to one through a change of direction where we’ve actually doubled the load on our anchor. We’re seeing a load on our anchor that’s greater than the result of our mechanical advantage. We’re actually seeing six T. The reason is we have five T on our load, and we are pulling an additional one T against the anchor in the direction of the load. So this five T is added to this one T and this also equals six T.

All right. So what we’ve covered here is basically an introduction to several different levels of mechanical advantage that we can construct in order to help us move rescue loads. We’ve shown everything from a one to one haul system, which is essentially us pulling on a rope, or pulling on a rope that travels through a change of direction pulley. We’ve showed a two to one, three to one, a four to one, and we’ve shown two different five to one haul systems.

And then our final system, this complex five to one haul system that has some benefits and some drawbacks. Benefits including requires less gear, and you’re able to pull downhill or pull away from the anchor if you want to. But the disadvantages that the pulleys tend to collapse more quickly on one another. 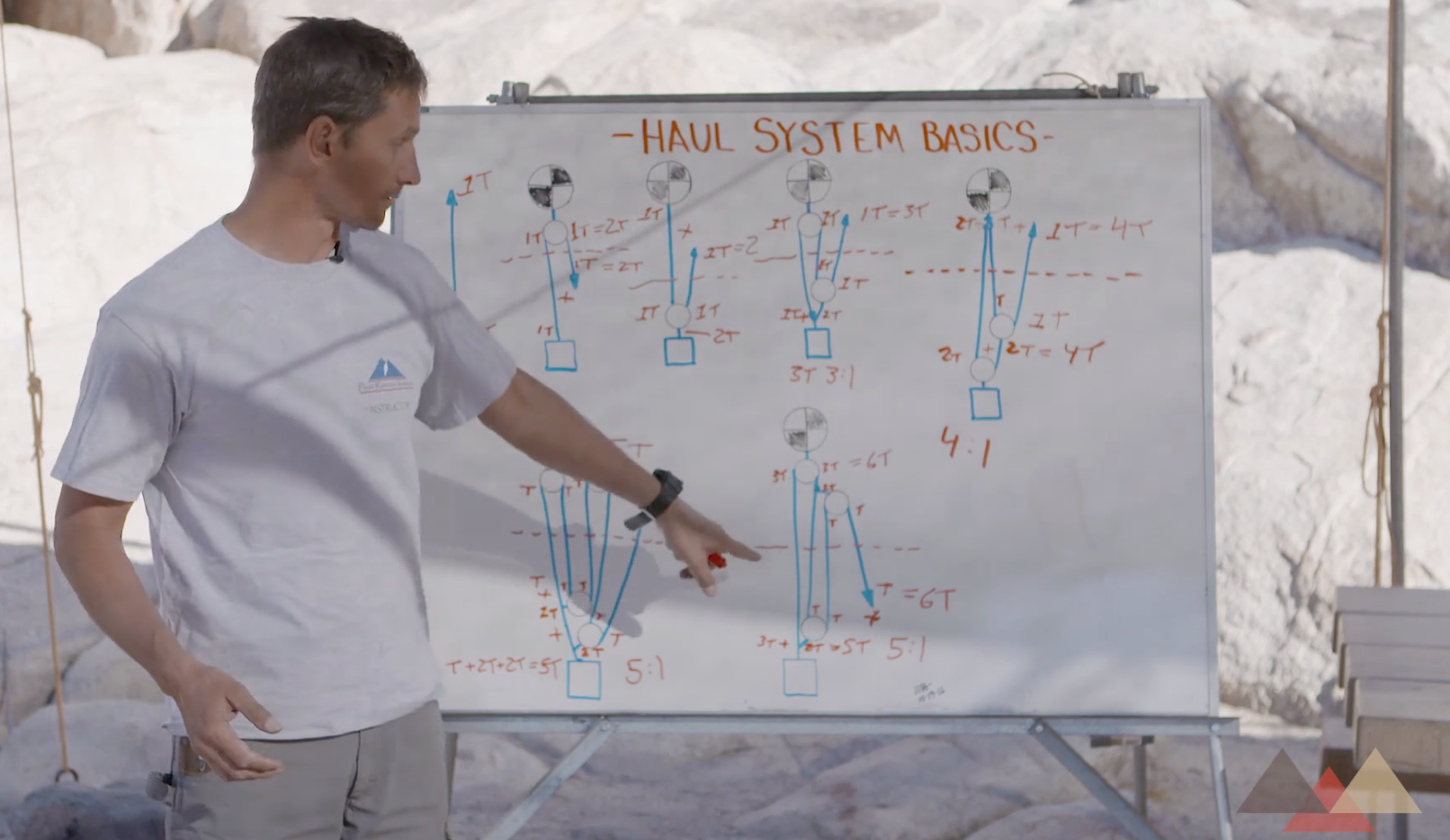