So progressing up through the levels of mechanical advantage from 3:1, we can go to a 4:1. For those in the fire service, this is a fairly common mechanical advantage system that we’ll find actually piggybacked onto a main rescue rope. So we’ll build a short 4:1 haul system. This is a 4:1 piggyback haul system, and it consists of, basically, two strands of rope. You can either use two separate strands, or you just isolate two strands with a figure eight on a bite hooked off to an anchor. And then we have what you’ll recognize as a 2:1 haul system being pulled on by another 2:1 haul system. 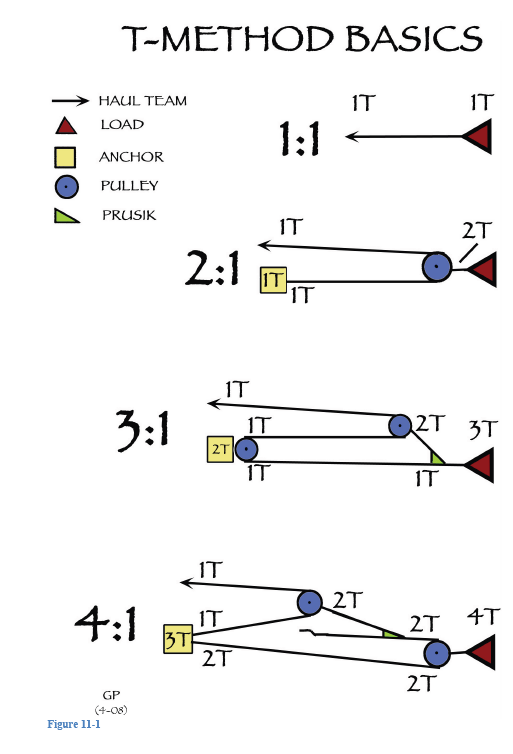 This is what we call a compound. This is what we call a compound mechanical advantage, when you have one haul system hauling on another haul system. So let’s do our T analysis on this 4:1 advantage. So once again, we start with 1T, which transmits down to 1T entering the pulley, 1T exiting the pulley, and that T comes up and just stays on the anchor, so we end at the anchor because we’re tied off. And then we move down below the first pulley, and we know we have 2T. And another of the rules with the T method is whatever goes into a pulley, the exact same thing has to come out. That’s what pulleys do. They balance and double tension. So 2T goes into the pulley, 2T comes out of the pulley, and 2T transmits up to the anchor.

We can add these 2T together. 2T plus 2T equals 4T, and we have a 4:1 haul system. Another thing you might observe as we’re going through the T method, I’m putting the Ts on the anchor into the system, and I’m doing that for a specific reason. You can actually check your work by looking at the effect of the tensions moving through the system, the effect they have on your anchor, and you can actually also use this to kind of analyze what’s happening with your anchors. So if we split our equation, as it were, in two… One side of an equation has to equal the other side of an equation. So we end up, on one side of our equation, we have 2T, 2T, which results in 4T.

Up here on our anchor, we have 2T on our anchor that came from the 2T that came into our second pulley, and we have a 1T on our anchor, which came from the 1T going into our first pulley, which is 3T. So our anchor is supporting three units of tension in this system. The additional unit of tension is our haul line. So we have 2 + 1 + 1 = 4T. So as you can see, our equation balances, and we also know that our anchor is supporting three fourths of the load. 2T + 1T, 3T. 3T equates to three quarters of the load in our 4T or 4:1 haul system.

So let’s back up and do that same analysis on the anchor for our 3:1 haul system. So once again, we’ll kind of find the middle of our equation, and we already know we have 1T plus 2T in our 3:1 haul system. 1T + 2T = 3T, or 3:1. If we come up here and we look at where the Ts are at the other side of our system, 1T and 1T on either side of the pulley that’s attached to the anchor, well, that’s two units of tension that’s being transmitted to the anchor. 1 + 1 is 2, plus the 1T introduced by the haul team is 3T.

So I have 2T on the anchor, and I have 2T pulling in the direction of the load. So in this case, our anchor is actually feeling double the load. And we talk about magnification of forces in relation to haul systems. A haul system can at the most magnify forces two times against the anchors, and as we build more and more mechanical advantage, the anchors share different proportion or a different fraction of the load. But the highest load that the anchor has to bear is double if we’re pulling directly through a change of direction pulley.