Let’s begin with manual hauls. When you talk about manual hauls or mechanical advantage, you have to talk about work. Work is done when force moves an object. Well, what’s this thing called force? Force is simply a push or pull that causes an action. And in fact, force can be measured with something as simple as a spring scale.

What do those simple machines do? They just simply decrease the force required to move a load.

Now let’s get some examples out here.

Weight at the base of a building. It takes a lot of work to move this weight straight up. No? Simple machine, an incline plane. Move the rock. We’ve all done this all the time. Incline plane is a simple machine. Makes work easier. Now what’s the difference between the load moving from here to here? From here to here? (see below)

The force is over a greater distance.

Or another way to consider levers…

Let me give you another example of an incline plane, a screw.

What is a screw, but an incline plane wrapped around a nail? If you have a nail, takes a great force perhaps to pound it into wood. Compared to a screw, it goes in equally as fine, but what’s the difference?

It’s easier to do. It takes less force. What’s the other thing? It takes longer.

So there’s a price to pay with this mechanical advantage stuff. Another simple machine, a lever. A lever with a fulcrum. Simple machine, for example, a teeter totter. Let’s look at this a little closer.

Leverage, right. We’ll continue. See where this is going. One ounce is now holding three ounces.

All right, let’s continue more. One ounce is now going to hold five ounces. This lever, a great simple machine. There’s no magic to it. Didn’t create energy, but what changed? How could this one ounce now hold five ounces? What changed?

The distance. The lever arm changed. I’m foreshadowing here. This is going to be a common theme, or it has been thus far from what I’ve talked about.  So all I’ve done is move the fulcrum. I didn’t change the force. The force remained one. The distance though, the distance, the force traveled, that’s what changed.

Now, what’s a wheel? As it turns out, a wheel is a circular lever. A circular lever. The axle of the wheel is the fulcrum. Make sense? Now let’s look at this. This is what we get to work with, pulleys. What’s a pulley? A pulley is a wheel. A pulley is a wheel with a string around it. What does a pulley do? A pulley simply changes the direction of a flexible material. The flexible material that we’re going to use is a rope. All this does is change the direction of the force.

Now, how do pulls create mechanical advantage? There’s no electricity in it. How does it manifest this energy? Well, nothing in the world in physics is free. So with that mind, what’s the cost? The cost is endurance. Mechanical advantage spreads the weight of the load over a distance. The distance for us will be the distance of the rope.

So we have a three pound load. What do you expect to happen?

Three pounds to lift it.

You have six pounds at the anchor. When you guys put fixed pulleys in anchors, you can double the load. There’s the example right there, right there for you to see.

Now what’s the other way we measure mechanical advantage of pulls. 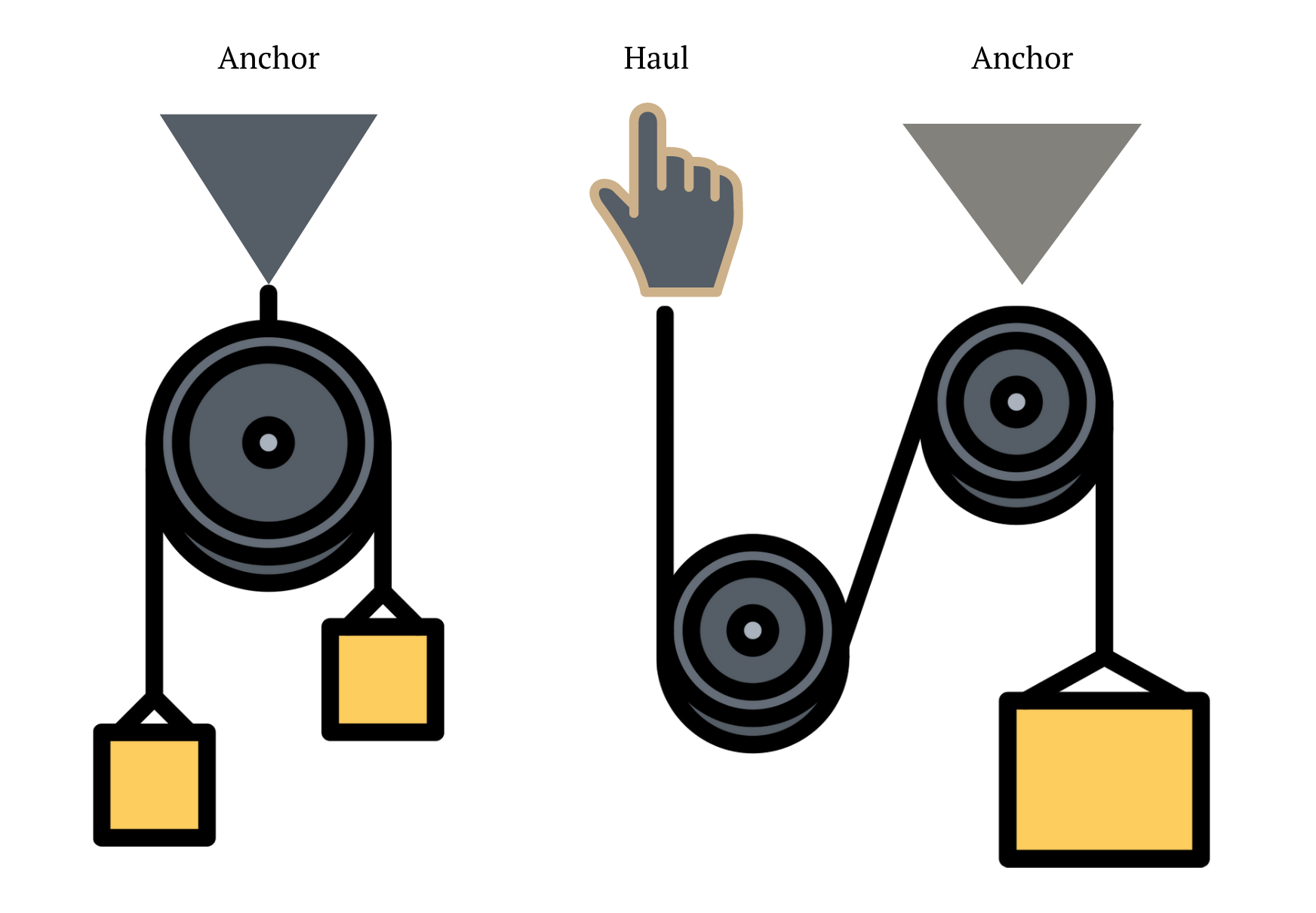 All right. Let’s check that out. This, as it turns out, is about one foot. Yeah. Pretty close. So let’s measure. Okay. That’ll be there. We’ll measure from that point. That’ll be one foot right about there. What do you think? Boom. One foot. One to one mechanical advantage. Good. Let’s carry on.

So we’ve talked about a fixed pulley. How’s about a moveable pulley?

Moveable pulleys, think of it as two ropes lifting one load. With a two to one mechanical advantage. That’s essentially what’s happening. In effect, half the load is on one side and half the load is on the other. So the load is three pounds, correct? Somebody with good eyes tell the crowd.

Okay. What’s the load here?  About half right?

About one and a half because that’s two and that’s about one and a half on that side as well. So two to one mechanical advantage utilizes the moveable pulley. The pulley is at the load. It’s moving. Fair enough? Everybody understand that? Really? I’m testing you right now.

What should I feel if I’m hauling? One and a half? All right. Load is three. Put it in static mode. It’s about one and a half. It’s a fixed pulley at the anchor. It simply becomes a change of direction. Okay. Check this out. It’s two to one about. Actually the change of direction may put more efficiency into the system. 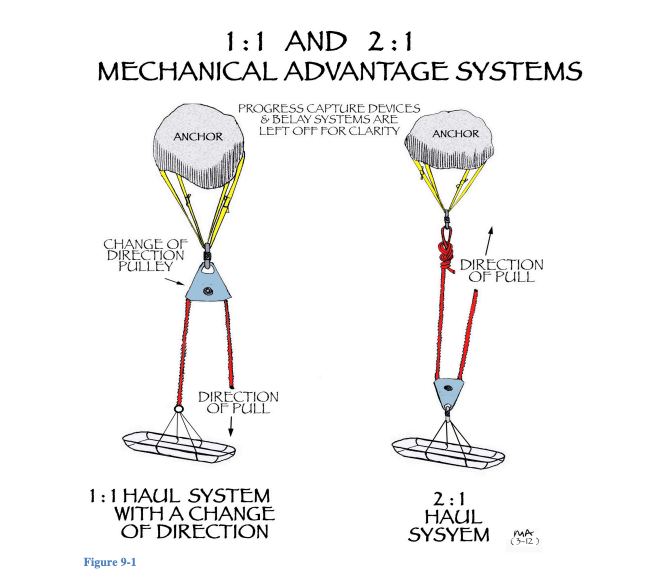 So we’re talking about pulley systems. What else can they be? A mixture of both. They can be not only fixed, but they can be moveable. So this is the combination of a fixed and a moveable pulley.

Let’s make it a reasonable haul. Three pounds at the load. One pound at the haul. What should be right here? What kind of load do you think will be there? Two pounds.

The load of three is divided, two plus one is three. So the point being again, three to one mechanical advantage, this load is displaced over three lines. We saw the result experimentally. Holy cow, that weighs three pounds. I’m only lifting one pound.

We can measure mechanical advantage simply using scales or a measuring stick to measure how far we’ve pulled the load versus how far the load moved. I want you guys to leave here knowing how to calculate mechanical advantage for any pulley system. And we’re going to use the T Method. The rules for the T Method are few, but they’re terribly simple. Now I’m going to preface all this when saying how simple is a T Method? Well, it only requires addition.

T Method, or tension method. I’m going to go over these and we’ll work some problems. Okay.

Okay. Let’s go through the T Method. One, you assign one unit of tension at the haul. Truth be told? This could be called anything. One unit of fluff. One unit of goodness, anything. But it is just one.

You start off with the unit of one. You have to trace the rope. This is the hard part. When you get to a pulley, what do you do? The force on one side of the pulley equals the force on the other side of the pulley. They’re not… Pulleys aren’t magical. They don’t suddenly make energy.

So here’s the addition. At that pulley, you add one plus one, which equals two. There’s still one unit of force on the line. Follow line that down. The one unit of force goes to the load. Total the units of tension that reach the load. The unit of tension that reaches the load is one. Remember, the mechanical advantage is the ratio between the total units at the load and the one unit at the hall. One to one.

The mechanical advantage is the ratio of the load, which is two compared to the haul, which is one.

Hey, how do you check your work?  The load has to equal the haul line, plus the unit that is terminated at the haul. One plus one equals two. Good? Let’s continue.

Three to one. The line comes from the load around a pulley to another pulley, to the haul line. The pulley is connected to that line via a prusik. Three to one? Let’s find out.

One unit of haul. One unit at the haul, trace the line. We come to a pulley. There’s one unit on this side of the pulley, an equal amount on the opposite side. So one plus one, there’s two units at that pulley. Continue to trace a line. There’s still one unit.

Trace a line. There’s one unit on this side of the pulley, an equal amount on the opposite side. There’s two units here, correct? There’s still one unit on the line. Uh-oh it just connected to the two units. One, this one unit plus two units continues down to the load. Two plus one is three. The ratio, the units that have reached the load versus the haul.

Let’s do some more stuff.

So now coming into this pulley, we have a force of three coming out of the pulley. We have…

Three. The force coming in is the same force that comes out. Nothing changes. Three plus three is what? Six. So there’s a unit of three coming up the line, correct? It reaches this pulley. So there’s three on that side. Three on the opposite side, six up here. So there’s three units coming down the line meeting six units. Three plus six is nine. I’m going, “Oh, well I think it’s nine.” So as it turns out, this is a nine to one mechanical advantage.