Gear Used In An English and Norwegian Reeving System – Overview Gear Used In An English and Norwegian Reeving System – Overview

You can use Reeves Systems on tripods, artificial high directional devices, or tension lines. These are great systems to keep rescuers out of the hazard zone, whether it be a limited rigging area where there’s a danger of a fall hazard, or whether that be an atmospheric hazard where you don’t want the majority of your team exposed. This way, a lot of your rigging is done on the ground in a safe area limiting the number of people that are on the structure.

Notice the four control descent devices and how the riggers are putting them into use to have the tension line and to be operating the English Reeve system.

Starting from the tree on the left (you’ll notice that we’ve deemed the tree to be bomber) we’ve used two slings with two carabiners into a rigging plate and are considered to be a redundant system.

If we’ve got a bomber anchor, which we do, and we have a redundant system with the two slings and the two carabiners, then we’re happy rigging all of our control descent devices to that rigging plate.

Starting from the top, we’ve got a Petzl Rig and a (Climbing Technology) Sparrow and then from there a CMC MPD and a Petzl Grigri Plus on the bottom. 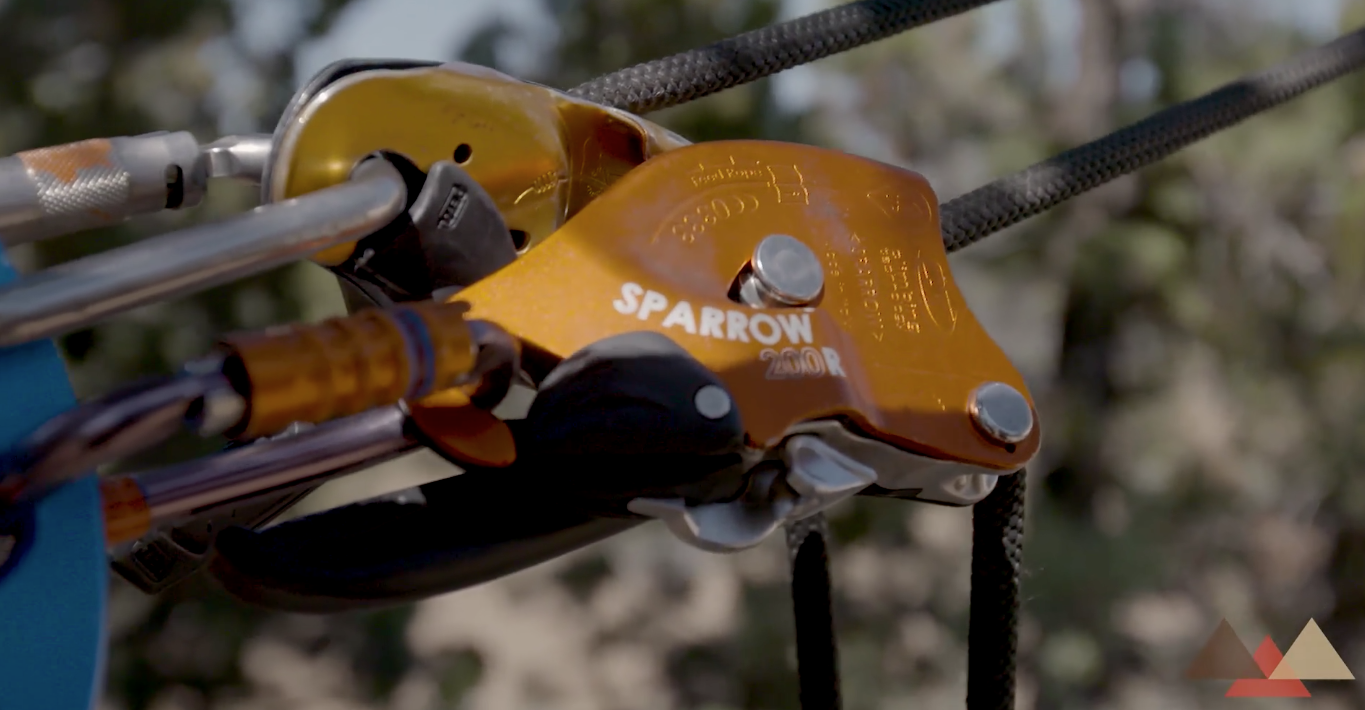 The Petzl Rig and the CMC/CT Sparrow are being used to tighten the track lines with a 3:1 and as capture devices. Have only one person tighten the 3:1 so as not to over-tighten the lines. We have also tied a catastrophe knot into the end of the lines about 3’ (1m) back from the devices should something occur.

Our reeve lines are being controlled by the CMC MPD and the Petzl GriGri Plus. We’ve purposely used these devices in order to show the range of devices that are available. These devices are all panic-stop. They’ll all pass a whistle test, are all bi-directional devices and are all certified with 11-millimeter rope.

From here, we’ve now changed over and put a 3:1 onto the MPD. We’ll be hauling up on one of the reeve lines and using the Grigri as a belay, which is its intended use in order to raise the rescuer and/or the patient up and out of the space.

So in this particular scenario, what we have is an English Reeve setup. This allows us to lower our rescuer, hook up our patient, and lift them vertically out of the space while limiting the number of rescuers we need on top of this structure. We have rigged the English reeve to a tension line. Now you can rig your reeve systems to an artificial high directional (AHD) such as a Terradaptor or a Vortex. You could rig it to a tripod as long as it’s rated for that type of load. Because of the hazards in the space that we’re operating around i.e., the difficulty rigging that tripod up there, it’s quicker and easier just to use a tension line. We have only used one carabiner to attach the double sheaved pulley to the tension lines. Your AHJ may require two carabiners here for redundancy. Notice that there’s a couple of differences you see from a regular English reeve highline. For instance, we don’t have control lines on either side. In confined space, especially in this particular situation, we have the ability to put the patient down on the deck, move our prusiks over, or simply raise them up and lower them right to the ground. This is something that doesn’t require us to rig that second and third lines (the up and down control lines) and it’s quicker overall on the rigging. You’ll notice that we also aren’t using prusiks on our reeve. We’re running a twin-line or a two-line reeve system instead.

When we start lowering people into confined spaces, we have issues with the sides of the space, with the edges of the hole or the entrance that we go in and out of. These are areas the prusiks can get caught up, and this would then require our rescuer to focus on these prusiks opposed to keeping the patient from banging into the sides of the walls. Rigging the twin-line reeve system allows us to remove that issue of worrying about the prusiks.

Much like high lines in a rope rescue environment, there’s an obvious side to put your control side (i.e., your control descent devices, and an obvious side for your farside, ie. your knots) in the confined space environments as well. Here, the part that was the most difficult to access, the highest point, was the point that we sent on rescuer up in order to rig the far side ropes. We’ve rigged our tension lines and then both of our English reeve lines hard into fixed anchors on the far side.

With respect to using high-strength tie-offs both scientific studies and just regular hands-on use, we’re not putting the forces into these ropes that would require us to use high strength tie-offs in order to get the full strength of the rope. Even with this particular scenario, we’re running twin tension lines and twin reeve lines which means that our force on the single person load is being distributed over two lines. In this case, a simple figure eight or splitting the one the rope and using butterflies is more than sufficient in order to hold that force. Carabineers are used to ensure that the ropes do not slide off the top of the structure. That’s pretty common both in the rope rescue and the confined space rescue realm. Outside of the English Reeve, we also have a Norwegian Reeve. The rigging for the English and Norwegian is very similar, except for with the Norwegian, the lines are terminated at the reeve.

Whether this is a tension line or an artificial high directional, the lines are going down to our rescuer in that classic Reeve look, back up, and then terminating at the top of that AHD. This allows us to remove the rope length from this point to our far side anchor. So, if that’s 100 feet or 50 feet, we’ve gained that rope back into service in case this is a very long lower that we would need to utilize that rope for.