The PETZL MAESTRO is a descent control device with an integral progress capture pulley for technical rescues.

1. Use only a lightweight cord to operate the handle. In certain situations, a cord that is too heavy could impede the AUTO-LOCK feature.

2. It is not possible to use the MAESTRO’s external brake when using a cord for remote control. Make sure that the load can be controlled without the need for additional friction of the external brake.

3. To maintain proper control over unlocking and descent speed, always hold the brake-side rope and the cord in the same hand. This can be done by wrapping the cord around your hand, creating a loop with the cord or attaching a carabiner to use as a handle.

“Devices such as the MAESTRO allow for rapid transition from raising to lowering in confined spaces while providing a high-efficiency progress capture,” says Russell McCullar, a Senior Instructor with the Mississippi State Fire Academy.

McCullar also says that “in older legacy systems with hard cams and Prusiks, if the load became hung or stuck in a portal the rescuers would have to haul in order to release the rope grab and then lower the patient. This process would often prove painful, and complicate patient movement and portal/edge transition. The MAESTRO allows for immediate conversion to a lower to alleviate these concerns. Furthermore, you are able to facilitate this transition to lower remotely using a cord as an extension of the handle. The future looks like more teams will be transitioning from the traditional legacy systems and into quickly convertible ones like the MAESTRO 4:1 and 3:1.”

Using the MAESTRO in a vertically confined rescue scenario
The following scenario takes into consideration that a tripod or davit arm is already in place over the confined space entry.

1. Load the rope into the MAESTRO, following the proper rope orientation and complete a systems check.

2. Attach the MAESTRO to the head of the tripod.

3. Set up a 4:1 pulley system using a TWIN pulley at the rescuer connection and a RESCUE or MINDER pulley attached to the becket of the MAESTRO. The MAESTRO acts as the final pulley and progress-capture in the system.

4. Attach the pulley system to the head of a NEST, or other confined space rescue litter, using a locking carabiner and an adjustable GRILLON lanyard connection to the litter attendant’s harness, or to a LIFT a spreader above their harness. If the tripod or anchor point is set high, the MAESTRO remote control handle operation feature may be used to control the rescuer’s descent (an independent belay system should also be attached to the litter and rescuer, but is not specifically addressed in this article).

5. Slowly lower the litter and litter attendant into the confined space while maintaining a hand on the brake-side of the rope.

6. Upon reaching the patient, the litter attendant assesses the patient’s condition, performs necessary first aid, and removes any hazards or entanglements.

7. The litter attendant packages the patient in the litter, and rechecks all straps and connections.

8. The rescue system operator raises the litter and rescuer with the MAESTRO by simply pulling on the non-load side of the rope. The MAESTRO automatically captures the rope progress and there’s no need to manipulate the handle when switching to a hauling operation. 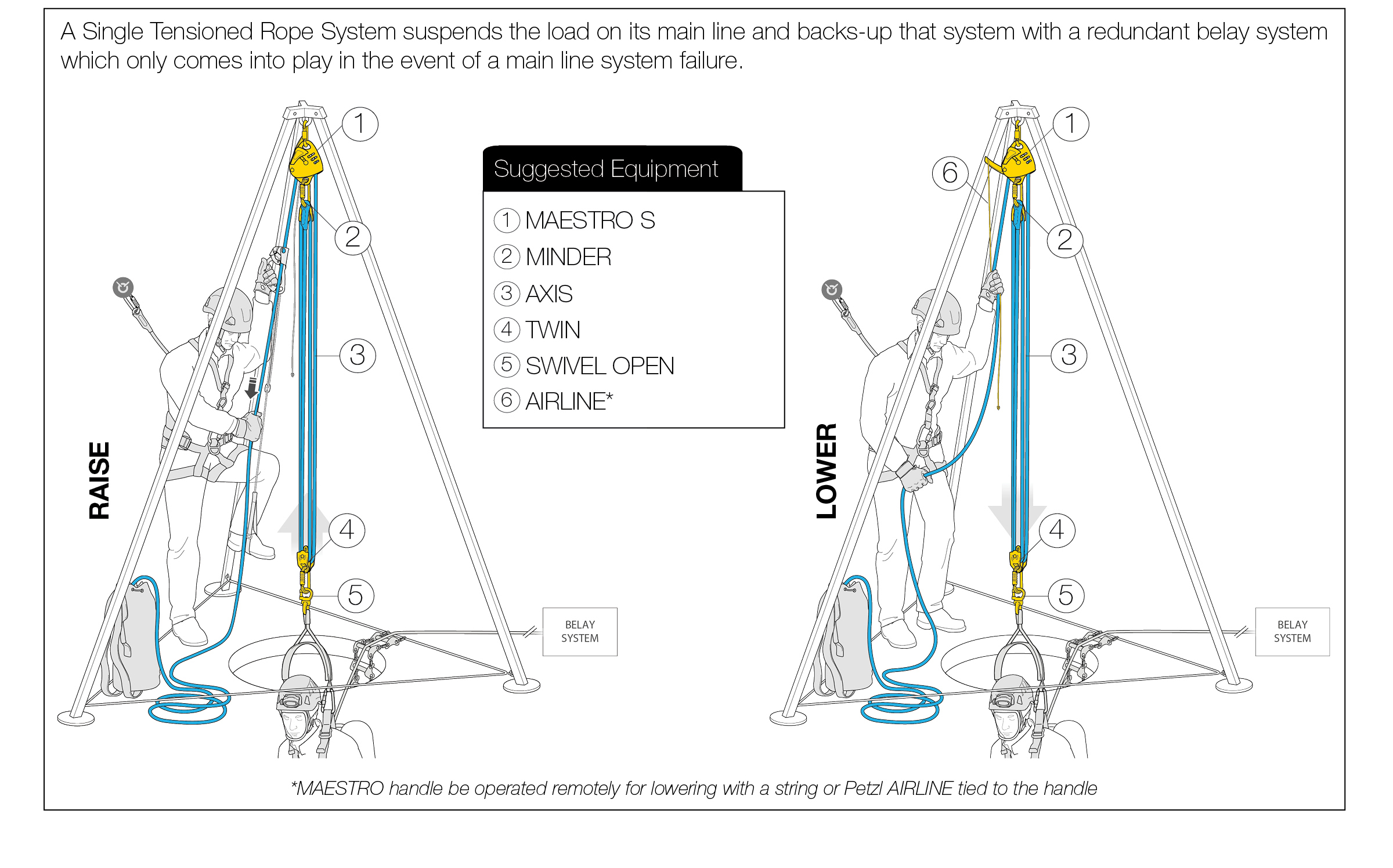 135 thoughts on “CONFINED SPACE RESCUE WITH THE PETZL MAESTRO”